Error: Twitter did not respond. Please wait a few minutes and refresh this page.

Last week, I had chanced upon a photograph of a Singapore junior college’s General Paper (GP) notes, which discusses issues of discrimination. In this particular section, the issue of homosexuality was discussed. I would not publish the photograph here as the author of the photograph had decided to remove the photograph, and I would like to respect the author’s right to do so.

However, I would like to point out two sentences which I was uncomfortable with:

Please note that as you do not have access to the notes, there can be a possibility of taking these statements out of context. Though I would say that, for whatever purposes the notes were created for, even as they could even be meant as a starting point for discussion, I do not believe that it is appropriate to frame the discussion from such a deterministic angle, first because of the lack of intellectual quality, especially since the context should be for a broad-based GP critical discussion, but more importantly, on the effects that it would on students who were exposed to such discriminatory language used in the notes, which ironically, aims to discuss the issue of discrimination.

I am a former student on this school. As a former student, I believed that I needed to speak up on the situation, to protect the current and future students, and to also encourage the school to create a more conducive environment for a more critical appreciation of the issue, no less because the students’ ability to understand the issue will determine the grades they would receive at their ‘A’ Levels.

I had sent the following email to the school (Please see the text below): 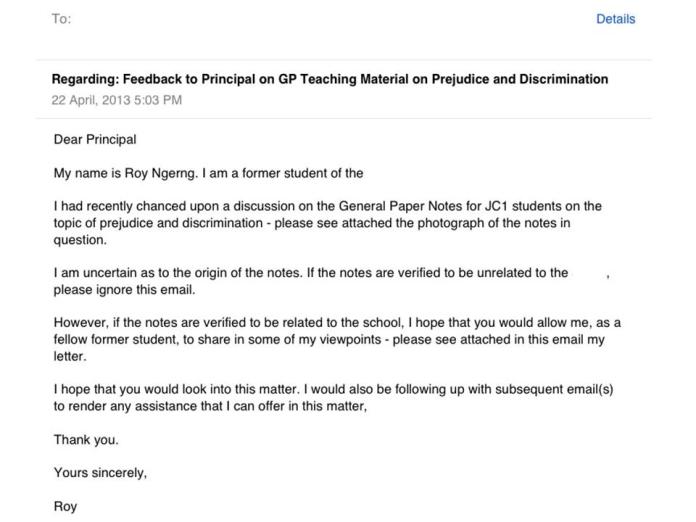 “My name is Roy Ngerng. I am a former student of the <School>.
I had recently chanced upon a discussion on the General Paper Notes for JC1 students on the topic of prejudice and discrimination – please see attached the photograph of the notes in question.
I am uncertain as to the origin of the notes. If the notes are verified to be unrelated to the <School>, please ignore this email.
However, if the notes are verified to be related to the school, I hope that you would allow me, as a fellow former student, to share in some of my viewpoints – please see attached in this email my letter.
I hope that you would look into this matter. I would also be following up with subsequent email(s) to render any assistance that I can offer in this matter,
Thank you.
Yours sincerely,
Roy”
*****

I had attached the following letter in the email (Please see the text below): 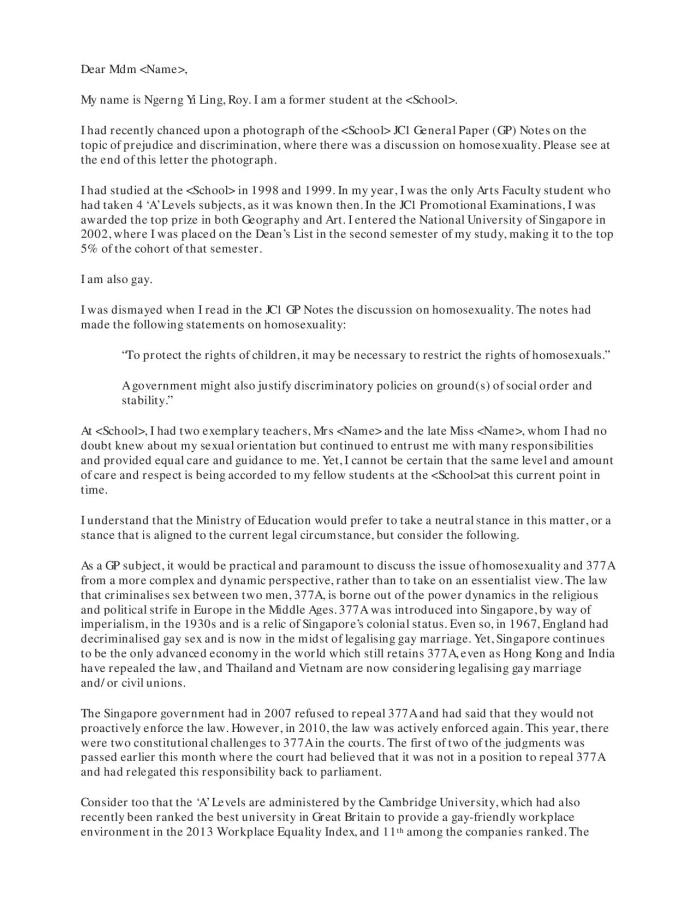 My name is Ngerng Yi Ling, Roy. I am a former student at the <School>.

I had recently chanced upon a photograph of the <School> JC1 General Paper (GP) Notes on the topic of prejudice and discrimination, where there was a discussion on homosexuality. Please see at the end of this letter the photograph.

I had studied at the <School> in 1998 and 1999. In my year, I was the only Arts Faculty student who had taken 4 ‘A’ Levels subjects, as it was known then. In the JC1 Promotional Examinations, I was awarded the top prize in both Geography and Art. I entered the National University of Singapore in 2002, where I was placed on the Dean’s List in the second semester of my study, making it to the top 5% of the cohort of that semester.

I am also gay.

A government might also justify discriminatory policies on ground(s) of social order and stability.”

At <School>, I had two exemplary teachers, Mrs <Name> and the late Miss <Name>, whom I had no doubt knew about my sexual orientation but continued to entrust me with many responsibilities and provided equal care and guidance to me. Yet, I cannot be certain that the same level and amount of care and respect is being accorded to my fellow students at the <School>at this current point in time.

I understand that the Ministry of Education would prefer to take a neutral stance in this matter, or a stance that is aligned to the current legal circumstance, but consider the following.

As a GP subject, it would be practical and paramount to discuss the issue of homosexuality and 377A from a more complex and dynamic perspective, rather than to take on an essentialist view. The law that criminalises sex between two men, 377A, is borne out of the power dynamics in the religious and political strife in Europe in the Middle Ages. 377A was introduced into Singapore, by way of imperialism, in the 1930s and is a relic of Singapore’s colonial status. Even so, in 1967, England had decriminalised gay sex and is now in the midst of legalising gay marriage. Yet, Singapore continues to be the only advanced economy in the world which still retains 377A, even as Hong Kong and India have repealed the law, and Thailand and Vietnam are now considering legalising gay marriage and/or civil unions.

The Singapore government had in 2007 refused to repeal 377A and had said that they would not proactively enforce the law. However, in 2010, the law was actively enforced again. This year, there were two constitutional challenges to 377A in the courts. The first of two of the judgments was passed earlier this month where the court had believed that it was not in a position to repeal 377A and had relegated this responsibility back to parliament.

Consider too that the ‘A’ Levels are administered by the Cambridge University, which had also recently been ranked the best university in Great Britain to provide a gay-friendly workplace environment in the 2013 Workplace Equality Index, and 11th among the companies ranked. The University of Cambridge and Great Britain have a much longer, stronger and vibrant movement on civil rights and it is without a doubt that they would adopt a much more discerning perspective than what the <School> JC1 GP Notes had catered for. Certainly, their sophisticated understanding of the issue would severely undermine what our students are being expounded on.

There are broader ramifications in the discussion on issues pertaining to sexual orientation that a responsible education needs to cater for. LGBTQ (lesbian, gay, bisexual and transgender) youths who grow up in an environment which routinely espouses a thinking without critically appreciating all facets of the matter can only constrain the intellectual and psychosocial development of our youths. Research has shown that many LGBTQ youths who face discrimination in such circumstances, grow up developing long-term mental health problems, such as lower self esteem, lower self acceptance and even depression. In turn, they would be more susceptible to risky behaviours, such as unprotected sex, because they would lack the confidence and negotiation skills to adequately protect themselves.

Discrimination towards LGBTQ individuals also reflect the larger societal mores of a people – what does it say about our lack of awareness and understanding towards matters of diversity and how we would treat other ‘minority’ populations, in terms of gender, race, age and class? The LGBTQ civil rights movement needs to be understood as part of a larger movement towards the recognition of rights and differences. It wasn’t too long ago that women and peoples of different colours regained their rights and dignity as equal human beings.

I am a by-product of an education system which had not catered adequately for my development and growth. At <School>, I would have been considered one of the most intelligent and well-performing students. Yet, it was many more years before I could reach a psychological development which could be said to be on an equal footing.

I write this email to you because first, I believe that a well-thought through GP essay on rights and discrimination needs to be more thorough and encompassing in its perspectives. This email would be more highly-received than what the notes would have. Second, I believe that in the interest of the overall health and well-being, as well as intellectual growth of our youths, we do need to provide an environment that allows them to learn in more empathetic and critically-thinking ways. What is the use of producing academically-qualified students who have compromised self-actualisation beliefs?

In the past one year, I have set up two blogs on LGBTQ and socio-political issues in Singapore. I have also had the opportunity to meet with students from the NationalTechnologicalUniversity, Ngee Ann Polytechnic, Nanyang Polytechnic and the Raffles Institution to share with them about LGBTQ issues. I have also met with students from the LiverpoolUniversity and an international news agency to discuss about the socio-political ongoings in Singapore.

I hope that the school will relook its teaching materials to provide our students with a more balanced and intellectually more adequate appreciation and inquiry towards the matter. This will not only put them on good stead for the ‘A’ Levels examinations, but also provide them with greater insights towards formulating their thoughts on discrimination and civil rights issues. I would also welcome the opportunity to provide further assistance to my alma mater to raise awareness and understanding on this matter.

I will update on this blog the outcomes, if any. If any case, I would continue to pursue the matter with subsequent emails to the school.

Update: I had not received a response from the school and had sent a subsequent email to the school. You can read the email if Part 2 of the article here.